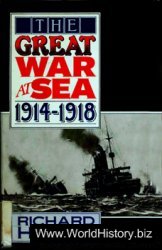 An eminently readable single-volume account of the fighting at sea during the First World War. The story is well told, especially in its clear rendering of such potentially confusing actions as Jutland and the Falkland Islands. The contest between the German and British navies during World War I was the greatest naval conflict in history. Richard Hugh's vivid rendering of this sea war brings each battle to life.