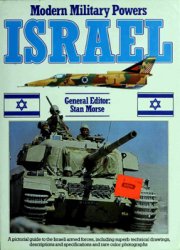 The rise of the Israel Defence Forces is one of the most remarkable phenomena of the modern military scene. Born out of the horrors of the holocaust of World War II, they have quickly grown into the most successful military force the world has ever seen. Five times they have been to war, and five times they have triumphed. They have faced and vanquished the entire hostile Arab world. They are the masters of modern warfare, and even the mighty USA gratefully accepts master classes from their war-proven airmen and soldiers. This volume illustrates and describes nearly all the items in Israel's order of battle.