The Warrior Elite: The Forging of SEAL Class 228 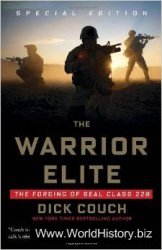 Author: Dick Couch
The Warrior Elite: The Forging of SEAL Class 228
Three Rivers Press
ISBN: 1400046955
2003
Format: EPUB
Size: 6,1 МБ
Language: English
Pages: 352
There is a pod of good books on the SEALs, but this one is unique. Couch, a Vietnam-era SEAL and retired naval reserve captain, was given the most complete access possible to the demanding BUD/S (Basic Underwater Demolition/SEAL) course and has recorded his observations, those of one who has been there and done a good deal of that. His account of Hell Week, the culmination of a formidable three-phase course intended to produce men who are physically, psychologically, and technically the best in the world at what they do, may leave the average reader short of breath. Few Hollywood stereotypes are on view; in their stead are a man who passed BUD/S at age 39, a superb swimmer who was disqualified for sinus problems, and a trainee at the low end of the fitness scale who subsequently won the Congressional Medal of Honor. Also on view is much serious thought by serious thinkers on the making of warriors at the dawn of the twenty-first century.