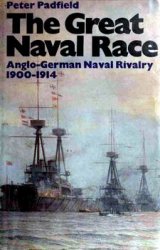 This is the dramatic story of the deadly competition in Dreadnought battleships between Great Britain and Imperial Germany in the years before the First World War. It is a story of two great empires set on a collision course to the Armageddon of 1914. But was the outbreak of war, as many historians have written, the inevitable result of the armaments race? Using original documentary evidence from both the British and German archives, Peter Padfield argues convincingly that it was not the armaments themselves that were the cause of the First World War. The personalities involved, especially Kaiser Wilhelm II with his obsessive dreams of imperial destiny, decisively influenced the course of events; and the German High Command did indeed conspire to manoeuvre towards conflict. The Great Naval Race is a clear and compelling narrative of those fateful years, and the author has vividly portrayed the leading protagonists in the drama - on the German side, Kaiser Wilhelm and the megalomaniacal Admiral Tirpitz, who launched the challenge to British naval supremacy. Among the British statesmen who responded to that challenge were Admiral Fisher, who dragged the British Navy into the twentieth century, Edward Grey, and Winston Churchill, who, belatedly recognizing the real nature of the German threat, turned his incomparable fire and energy to preparing the Navy for war.