The Czecho-Slovak Struggle for Independence, 1914-1920 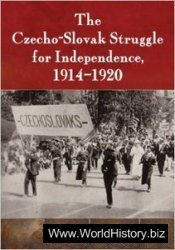 Author: Brent Mueggenberg
The Czecho-Slovak Struggle for Independence, 1914-1920
McFarland
ISBN: 0786496258
2014
Format: PDF
Size: 10,2 МБ
Language: English
Pages: 277
Pen and Sword uncovers how a group of revolutionaries from Bohemia transformed the idea of national independence for the Czech and Slovak peoples from a fantasy into a formidable movement that fielded armies, grabbed the attention of governments and contributed decisively to the fall of an ancient monarchy. Prior to 1914, few Czechs and even fewer Slovaks seriously consider a future for themselves outside the Austro-Hungarian Empire, but the outbreak of World War I forces some Czech leaders to reanalyze the political and military shortcomings of the Habsburg realm. A handful, led by Toma' Masaryk, decide to go abroad to raise the banner of resistance to the empire while generating propaganda in support of its enemies' war efforts. The liberation movement inaugurated by their activities, however, soon becomes divided between Masaryk, an admirer of the democracies of Western Europe, and Josef Durich, Pan-Slav who believes his people's salvation rests with tsarist Russia. At the very moment the Czecho-Slovak liberation movement is on the verge of an irreconcilable division between the two emigres, the onset of the Russian Revolution and the entry of the United States in the war swing the ideological contest in Masaryk's favor. The liberal government in Russia presents new opportunities for the Bohemian revolutionaries by permitting a unit of armed Czecho-Slovak volunteers to expand their ranks, but soon the Eastern Front lapses into inactivity as Lenin's Bolsheviks seize power and promote a pacifist policy. Meanwhile, back in Bohemia, the once meek Czech politicians become more outspoken in their opposition to Austria-Hungary as the wartime privations become more severe no relief in sight. The Czecho-Slovak national movement reaches its zenith in 1918.