The Sinking of the Bismarck: The Deadly Hunt 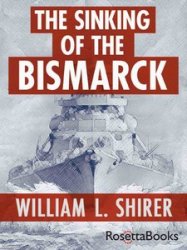 Author: William L. Shirer
The Sinking of the Bismarck The Deadly Hunt
Rosetta Books
2014 (first published 1962)
Format: EPUB
Size: 16,8 МБ
Language: English
Pages: 178
The Bismark was the greatest warship ever built, with guns so powerful and accurate it could destroy an enemy ship while safely staying outside the line of fire. But the Allies had to sink it…or risk losing the war. William Shirer, famed World War II correspondent and author of The Rise and Fall of the Third Reich, captures every suspenseful moment of the perilous mission. Most tragic of all was the loss of the HMS Hood, the British Navy’s star battleship, sunk by the Bismark in just minutes. However, a mixture of luck and new technology—including radar—turned the tide in the Allies’ favor.