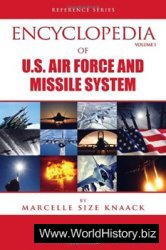 Volume 1 deals with the development, deployment, and operations of fighter aircraft between 1945 and 1973, commencing with the F-80 Shooting Star and ending with the development of the F-15 Eagle. Many of these aircraft were employed during the Korean War, the war in Southeast Asia, and during the cold war crisis throughout the world. The origin of each aircraft is noted as well as its most troublesome development, production, and operational problems. Also covered are significant modifications, most of which can be attributed to ever-changing aeronautical technology. The second in a series of encyclopedias of United States Air Force Aircraft and missile systems, this volume covers the developing and fielding of bomber aircraft between 1945 and 1973, commencing with the Convair B-36 Peacemaker and ending with the development of the Rockwell International B-1A.