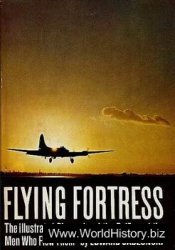 The Boeing B-17 was more than a plane—and its story, and that of its crews—is more than history. It is drama, romance, adventure, tragedy and folklore set against the panorama of the greatest war in history. To the men who flew in the B-17, and particularly to those who feel thev owe their lives to this majestic aircraft, it was more than a metal monster with four engines and a hundred-foot wing. The B-17 was almost human—the Queen of the Bombers, the Big Bird, a Glorv Wagon, affectionately named "Rosie's Riveters," "Memphis Belle," "Swoose," "Suzy-Q," "Hell's Angels"—names which during the bittersweet years of war became as celebrated as the men who fought in them.