War in the Balkans: An Encyclopedic History from the Fall of the Ottoman Empire to the Breakup of Yugoslavia 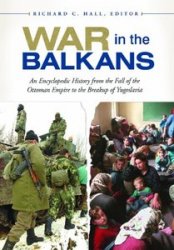 Author: Richard C. Hall
War in the Balkans: An Encyclopedic History from the Fall of the Ottoman Empire to the Breakup of Yugoslavia
ABC-CLIO
ISBN: 1610690303
2014
Format: PDF
Size: 7,9 МБ
Language: English
Pages: 411
The Balkan Peninsula, which consists of Albania, Bulgaria, Romania, Moldova, and the former Yugoslavia, resides in the southeastern part of the European continent. Its strategic location as well as its long and bloody history of conflict have helped to define the Balkans' role in global affairs. This singular reference focuses on the events, individuals, organizations, and ideas that have made this region an international player and shaped warfare there for hundreds of years.
Historian and author Richard C. Hall traces the sociopolitical history of the area, starting with the early internal conflicts as the Balkan states attempted to break away from the Ottoman Empire to the assassination of Archduke Franz Ferdinand that ignited World War I to the Yugoslav Wars that erupted in the 1990s and the subsequent war crimes still being investigated today. Additional coverage focuses on how these countries continue to play an important role in global affairs and international politics.