Barrel of a Gun: A War Correspondent's Misspent Moments in Combat 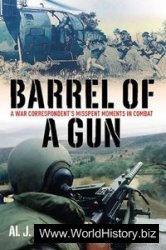 Author: Al Venter
Barrel of a Gun: A War Correspondent's Misspent Moments in Combat
Casemate Pub
ISBN: 1935149253
2010
Format: EPUB
Size: 10,0 МБ
Language: English
Pages: 480
"Anybody who says that the pen is mightier than the sword hasn't spent time in Somalia, or in Beirut during its bloody heyday." So begins this fascinating memoir of a journalist, filmmaker, and just plain raconteur who has made a career of examining warfare-on the ground and as the bullets are flying. While the average citizen is aware of violent conflicts broiling all around the globe, Al J. Venter-from some strange compulsion unexplainable even by him-has felt the need to see them all in person, preferably at the center of the action.
Born in South Africa, Venter has found no shortage of horrific battles on his own continent, from Rhodesia to Biafra, and Angola to Somalia. He has ridden with the legendary merc group Executive Outcomes, jumped into combat with South Africa's crack Parachute Regiment (the Parabats), and traipsed the jungles with both guerrillas and national troops under whichever strongman in the country then held power. During Sierra Leone's civil war he flew in the government's lone Mi-24 Hind gunship as it blasted apart rebel villages and convoys, his complaint being that the Soviet-made craft leaked when it rained.