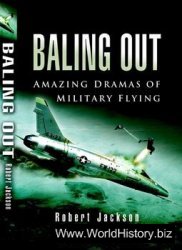 To bale out of a stricken airplane is a pilot's or aircrew's final chance to escape death. It is a traumatic and hazardous exercise that is only practiced in extremis and is in itself full of danger with no guarantee of survival. Many struggled free of a flaming and spinning aircraft only to see their parachute alight above them, some were machine gunned to death by their opponents as they drifted to earth, some landed in mine-fields and were blown apart and many landed in forests and died suspended from the treetops. And yet many survived, some to fight again and some to become prisoners of war.