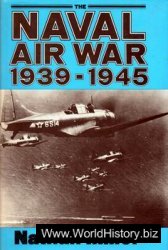 History records few stories more dramatic than that of naval aviation in World War II. At the outset of the conflict in 1939, it was regarded by some officers and strategists as a weapon of dubious quality and questionable utility. Nevertheless, naval aviation was to become a vital force in the Allied victory. Powerful, flexible and the most mobile of all weapons used at sea, naval air power had a decisive influence upon events in all theaters of operation. The airplane and the aircraft carrier inspired new tactics and technologies, resulting in a revolution in naval warfare as profound as that caused by the introduction of steam and armor plate. For the first time, naval battles were fought without the opposing fleets ever catching sight of each other.