Bombing to Win: Air Power and Coercion in War 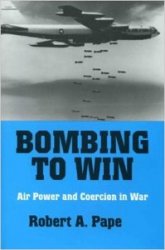 Author: Robert A. Pape
Bombing to Win: Air Power and Coercion in War
Cornell University Press
ISBN: 0801483115
1996
Format: PDF
Size: 15,7 МБ
Language: English
Pages: 408
From Iraq to Bosnia to North Korea, the first question in American foreign policy debates is increasingly: can air power alone do the job? Robert A. Pape provides a systematic answer. Analysing the results of over 30 air campaigns, including a detailed reconstruction of the Gulf War, he argues that the key to success is attacking the enemy's military strategy, not its economy, people or leaders. Coercive air power can succeed, but not as cheaply as air enthusiasts would like to believe.