Jet Planes of the Third Reich - The Secrets Projects, Vol. 1 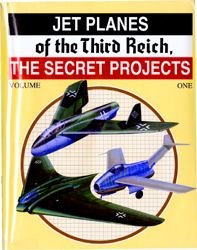 This first volume of Jet Planes of the Third Reich, The
Secret Projects covers mainly those German jet and
rocket aircraft projects that were designed prior to V-E Day,
but failed to reach prototype status. In addition, it examines
those few projects that actually reached an advanced stage
of construction prior to the end of the war in Europe and
also those special projects that were further developed in
the immediate postwar years.

Proceeding through this volume, you will be amazed at the
number, diversity, and originality of the various German
aircraft projects. It is an astonishing record - there was no
shortage of ideas or creativity - every idea and possibility,
no matter how unorthodox, was explored, expanded and
advanced. Some projects were nothing more than serious
flights of fancy, such as the multitude of Junkers "EFo"
studies in the early forties. Others were quite a different
matter. A few might even be considered relatively "modern"
if viewed from the perspective of current aircraft design.