A Vertical Empire: History of the British Rocketry Programme 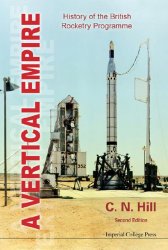 A Vertical Empire provides a description of the British rocketry and space programme from the 1950s to 1970s, detailing the Medium Range Ballistic Missile Blue Streak and its conversion to a satellite launcher as part of the European Launcher Development Organisation (Eldo). This extensively revised second edition includes material only made available in the past ten years and the text is supplemented by numerous photographs, sketches and statistics. The all-British satellite Black Arrow is described, as well as the research rocket Black Knight, the Blue Steel missile and the rocket powered interceptor aircraft.