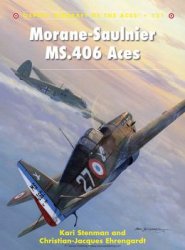 
The MS.406 was an important aircraft not only because it was built in larger numbers than any other French fighter of the period, but also because it was the first modern fighter in the Armée de l’Air inventory. Although comparable to the British Hurricane and early models of the German Bf 109, it was outclassed when flown against the more powerful, and faster, Bf 109E. With little or no protection (no armour or self-sealing tanks), the MS.406 sustained heavy losses during the Battle of France.