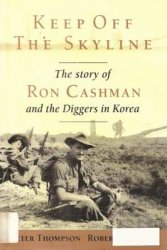 ‘Keep off the skyline’ was Ron Cashman’s watchword in wartime Korea and it helped to keep him alive in confronting a vigilant and dangerous enemy for almost two years of armed conflict.
The Korean War is ritually referred to in the Australian media as ‘the Forgotten War’. These were scenes of Australian heroism and Australian sacrifice that deserve their place in the public mind among the easily recognisable battle grounds of the two World Wars.
It is the story of a soldier who joined B Company as a rookie in the middle of savage firefight; who was wounded in action three times; who killed men in hand-to-hand combat; and who, in a brief interlude between long periods of barbaric trench warfare, met and fell in love with the woman who would see him through the armed conflict and its unexpected aftermath.