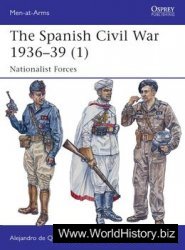 The Spanish Civil War, 1936–39, was the curtain-raiser to World War II, and the major international event of the 1930s. It was the first great clash of 20th-century ideologies, between the rebel Nationalist army led by General Franco (right-wing, and aided by Nazi Germany and Fascist Italy), and the Republican army of the government (left-wing, and aided by the Communist Soviet Union and many volunteers from liberal democracies). Three years of widespread campaigns involved the most modern weapons available.