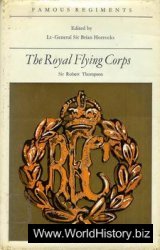 The Royal Flying Corps, in the six brief years of its existence from 13th April, 1912, to 1st April, 1918, when it was amalgamated with the Royal Naval Air Service to form the Royal Air Force, gained an undisputed reputation as one of the greatest fighting units of all time. It fought on every front in the First World War except the Russian and by its contribution to victory clearly established the role of an Air Force in war. The Corps itself and the names of its heroes will live for ever in the history of military aviation and in the memories of the British people. This short book does not pretend to do full justice to the men who, with their machines, not only forged a new weapon of war but opened up a whole new dimension for the achievement of man. It can only set out the bare facts, which speak for themselves, showing how the vision and purpose of the first few overcame all opposition and, through the fluctuating fortunes of war, altered the course of history.