The Shadow World - Inside the Global Arms Trade 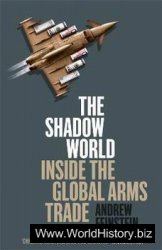 The Shadow World is the harrowing behind-the-scenes tale of the global arms trade, revealing the deadly collusion that all too often exists among senior politicians, weapons manufacturers, felonious arms dealers, and the military—a situation that compromises our security and undermines our democracy.
Pulling back the curtain on this secretive world, Andrew Feinstein reveals the corruption and the cover-ups behind a range of weapons deals, from the largest in history—between the British and Saudi governments—to the guns-for-diamonds deals in Africa and the imminent $60 billion U.S. weapons contract with Saudi Arabia. He exposes in forensic detail both the formal government-to-government trade in arms and the shadow world of illicit weapons dealing, and lays bare the shockingly frequent links between the two. Drawing on his experience as a member of the African National Congress who resigned when the ANC refused to launch a corruption investigation into a major South African arms deal, Feinstein illuminates the impact this network has not only on conflicts around the world but also on the democratic institutions of the United States and the United Kingdom.
Based on pathbreaking reporting and unprecedented access to top-secret information and major players in this clandestine realm, The Shadow World places us in the midst of the arms trade’s dramatic wheeling and dealing—from corporate boardrooms to seedy out-of-the-way hotels—and reveals the profound danger and enormous financial cost this network represents to all of us.