Meltdown - The Inside Story of the North Korean Nuclear Crisis 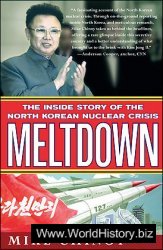 The Bush administration's bellicose but feckless attempts to quash North Korea's nuclear weapons program were the nadir of its famously maladroit diplomacy, to judge by this revealing blow-by-blow. Ex-CNN Pyongyang correspondent Chinoy details the rancorous infighting during which hardliners like John Bolton and Dick Cheney talked down State Department doves to impose an intransigent North Korea policy, replacing negotiations with Axis-of-Evil rhetoric and unilateral demands. Their approach backfired disastrously, he argues, as Pyongyang restarted and escalated its dormant nuclear initiative and finally tested an atom bomb while the U.S. fulminated helplessly—a needless outcome, he suggests, given the North Koreans' oft-expressed readiness to abandon their nuclear program in exchange for aid and normalized relations. Chinoy presents a lucid exposition of the issues along with a colorful account of diplomatic wrangling in which U.S. officials rivaled their North Korean counterparts in dogmatism and prickly sensitivity to niceties. (One joint statement was almost derailed when the Americans insisted on changing the phrase peaceful coexistence to exist peacefully together.) His is a fine, insightful diplomatic history of a dire confrontation—and a hard-hitting critique of the Bush administration's foreign policy.