The Scottish Civil War:The Bruces and Balliols and the War for Control of Scotland 1286-1356 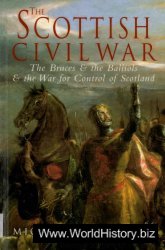 A controversial re-evaluation of the Scottish Wars of Independence which argues that the sixty years of civil war between two generations of rival claimants for the Scottish throne - each with their armed camps of ambitious nobles - had a far more devestating and revolutionary impact upon the kingdom of Scotland than the scrappy wars against England's Edwards I, II and III.