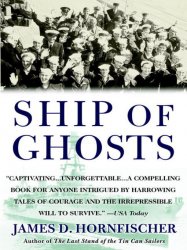 Author: James D. Hornfischer
Ship of Ghosts
Bantam
2007
ISBN: 0553384503
Format: EPUB
Size: 5,8 МБ
Language: English
Pages: 544
The navigator of the USS Houston confided these prophetic words to a young officer as he and his captain charted a course into U.S. naval legend. Renowned as FDR’s favorite warship, the cruiser USS Houston was a prize target trapped in the far Pacific after Pearl Harbor. Without hope of reinforcement, her crew faced a superior Japanese force ruthlessly committed to total conquest. It wasn’t a fair fight, but the men of the Houston would wage it to the death.
Hornfischer brings to life the awesome terror of nighttime naval battles that turned decks into strobe-lit slaughterhouses, the deadly rain of fire from Japanese bombers, and the almost superhuman effort of the crew as they miraculously escaped disaster again and again–until their luck ran out during a daring action in Sunda Strait. There, hopelessly outnumbered, the Houston was finally sunk and its survivors taken prisoner. For more than three years their fate would be a mystery to families waiting at home.