Warships Illustrated No.12 - British Cruisers in World War One 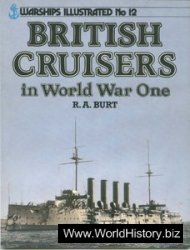 Author: R. A. Burt
Warships Illustrated No.12 - British Cruisers in World War One
Arms & Armour Press
1987
ISBN: 0853688141
Format: PDF
Size: 5,7 МБ
Language: English
Pages: 64
The subject of cruisers during the period 1870 to 1914 is a complex one because of the variety of designs which are included in this category. Frigates of the 1840s were the real ancestors of the modern cruiser, and used for multi-role purposes such as scouting, policing, message-conveying, shadowing and commerce protection duties. Dreadnought-cruiser in 1906 put an end to the growth in displacements, although paradoxically the protected cruiser had taken a retrograde step and returned to the origins of the second class cruiser, with more moderate dimensions and the more direct function of serving the Fleet rather than engaging adversaries irrespective of their size. This group formed the link to the light and heavy cruisers which became standard construction and went oh to serve in the First and Second World Wars.