Worlds at War: The 2,500 - Year Struggle Between East and West 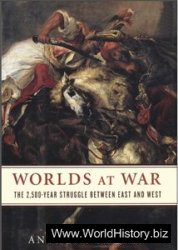 Author: Anthony Pagden
Worlds at War: The 2,500 - Year Struggle Between East and West
Random House Inc
2008
ISBN: 1400060672
Format: PDF
Size: 9,5 МБ
Language: English
Pages: 659
Spanning two and a half millennia, Anthony Pagden’s mesmerizing Worlds at War delves deep into the roots of the “clash of civilizations” between East and West that has always been a battle over ideas, and whose issues have never been more urgent.
Worlds At War begins in the ancient world, where Greece saw its fight against the Persian Empire as one between freedom and slavery, between monarchy and democracy, between individuality and the worship of men as gods. Here, richly rendered, are the crucial battle of Marathon, considered the turning point of Greek and European history; the heroic attempt by the Greeks to turn the Persians back at Thermopylae; and Salamis, one of the greatest naval battles of all time, which put an end to the Persian threat forever.