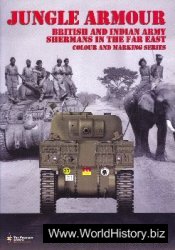 It was held that the jungle was no place for tanks, and it was only through the family connection of the 254th Tank Brigade's CO with the IV Indian Corps commander that the brigade took part in the Kohima and Imphal battles of early 1944. In southern Burma at the same time, the first Sherman tanks were making their presence felt in the Arakan. The performance of these American built tanks, their reliability and versatility, convinced British commanders that a tank could play a vital role in the reconquest of South-East Asia and the defeat of Japan. This booklet explains the history, organisation, and equipment of the brigades of M4A1, M4A2, M4A4, Dozer, and DD Shermans. A chart of WD numbers is included.