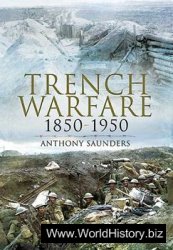 Although many books have been published about the Western Front, few of them look beyond the Great War to consider trench warfare in a wider historical context. Trench warfare was not an aberration of the Western Front. On the contrary, it was a watershed in a greater upheaval in warfare which started in the 1850s and continued well beyond the First World War. This book examines how trench warfare was fought, studying the Crimea, American Civil War and Japanese War 1904-05. He looks at how the Western Front of 1914-18 differed from the trench fighting of the Second World War and the Korean War. The book examines the evolution of trench warfare, technologically and tactically, from the Crimean War to the Korean War, during which time developments in military technology often advanced far beyond tactical thinking. Trench Warfare 1850 - 1950 discusses the impact of trench warfare on military thinking and considers how the stalemate of the Western Front was overcome.