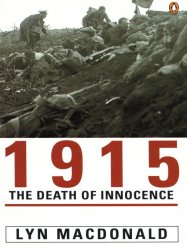 Author: Lyn MacDonald
1915: The Death of Innocence
Penguin
1997
ISBN: 0140259007
Format: EPUB
Size: 12,6 МБ
Language: English
Pages: 640
By Christmas 1914, the wild wave of enthusiasm that had sent men flocking to join up a few months earlier began to tail off, and though the original British Expeditionary Force had suffered 90 percent casualties, most people, particularly the soldiers themselves, still believed that 1915 would see the breaking of the deadlock. But their hopes were shattered on the bloody battlefields of Neuve Chapelle, Ypres, Loos, and far away on the shores of Gallipoli.
Lyn Macdonald's story of 1915 is stark, brutal, frank, sometimes painfully funny, always human. Never before has any writer collected so many firsthand accounts of the experiences of ordinary soldiers, through diaries, letters, and interviews with survivors—and it is the dogged heroism and sardonic humor of the soldiers that shine through the pages of this epic narrative. 1915 is a uniquely compelling blend of military history and poignant memories of the fighters who survived the ordeal.