Ukraine after Euromaidan: Democracy under Fire 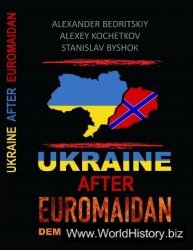 Author: A. Bedritskiy, A. Kochetkov, S. Byshok
Ukraine after Euromaidan: Democracy under Fire

The book «Ukraine after Euromaidan: Democracy under fire» is devoted to the 2014 coup in Ukraine and the chain of events that followed, including the war in the East Ukraine and establishing of the People’s Republics in Donetsk and Lugansk regions.
The events of the Ukrainian revolution of 2014 brought not only changes of the political landscape of the country but also transformation of Ukraine’s very map. Thus, the Republiс of Crimea returned to Russia, and in the East of the country two new republics have been formed: Donetsk People’s Republic (DPR) and Lugansk People’s Republic (LPR), which historically were part of Novorossiya.