Neonazis & Euromaidan: From Democracy to Dictatorship 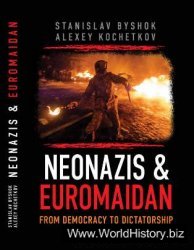 The book describes the development of the Ukrainian radical nationalist groups from 1991 to the present, including the «Right sector» and Svoboda («Freedom») party (up to 2004 — the Social-National Party of Ukraine), discusses their ideology, psychology and methods of political struggle.
Any revolution as a positive program uses the dominant ideas in society. In the Russian Empire in 1917, the trend was radical leftist ideology. In the Arab countries during the «Arab Spring» in 2010 — radical Islamism. In Ukraine in 2013-2014, the trend has become so radical nationalism that has absorbed pro-democracy and pro-European originally agenda.