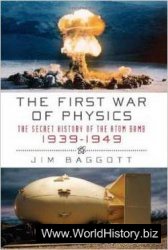 Rich in personality, action, confrontation, and deception, The First War of Physics is the first fully realized popular account of the race to build humankind's most destructive weapon. The book draws on declassified material, such as MI6's Farm Hall transcripts, coded soviet messages cracked by American cryptographers in the Venona project, and interpretations by Russian scholars of documents from the soviet archives.