Democracies and Dictatorships in Latin America: Emergence, Survival, and Fall 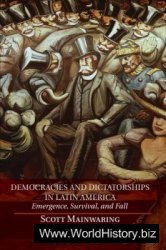 This book presents a new theory for why political regimes emerge, and why they subsequently survive or break down. It then analyzes the emergence, survival, and fall of democracies and dictatorships in Latin America since 1900. Scott Mainwaring and Aníbal Pérez-Liñán argue for a theoretical approach situated between long-term structural and cultural explanations and short-term explanations that look at the decisions of specific leaders. They focus on the political preferences of powerful actors - the degree to which they embrace democracy as an intrinsically desirable end and their policy radicalism - to explain regime outcomes. They also demonstrate that transnational forces and influences are crucial to understand regional waves of democratization. Based on extensive research into the political histories of all twenty Latin American countries, this book offers the first extended analysis of regime emergence, survival, and failure for all of Latin America over a long period of time.