The Unfinished Nation: A Concise History of the American People 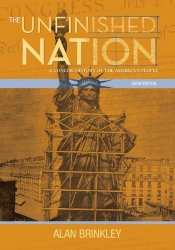 Known for its clear narrative voice and impeccable scholarship, Alan Brinkley's best-selling survey text invites students to think critically about the many forces that continually create the Unfinished Nation that is the United States. In a concise but wide-ranging narrative, Brinkley shows the diversity and complexity of the nation and our understanding of its history--one that continues to evolve both in the events of the present and in our reexamination of new evidence and perspectives on the past. This sixth edition features a new series of Patterns of Popular Culture essays, as well as expanded coverage of pre-Columbian America, new America in the World essays, and updated coverage of recent events and developments that demonstrates how a new generation continues to shape the American story.