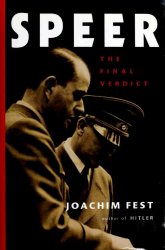 Albert Speer was an unemployed architect when Hitler came to power in 1933. Soon he was designing the Third Reich's most important buildings. In 1942 Hitler appointed him Armaments Minister and he quadrupled production, an astonishing achievement that kept the German Army in the field and prolonged the war.
Yet Speer's life was full of contradictions. The only member of the Nazi elite with whom Hitler developed more than a purely functional relationship (he has even been called "Hitler's unrequited love"), Speer was always an outsider in Hitler's inner circle. He saw himself as an artist, above the crass power struggles of the roughnecks around him. But his enormous ambition blinded him to the crimes in which he played a leading role.
Brilliantly illustrated, this gripping account of one man's rise and fall helps explain how Germany descended so far into crime and barbarism.