The Most Secret Science 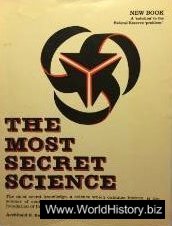 This is Archibald E. Roberts ' rare and explosive book The Most Secret Science (1987) which is probably one of the finest expose of how control of the wealth via central banks ultimately ends up with control over nation's economies, political parties and people in general. Roberts as an armyman participated in several US conflicts and could see with his own eyes that american army was not allowed to win them. His desire for an explanation led him to write the award winning book Victory Denied (1966) and several others. This is his most important work which addresses the most important science in the world - the science to control people. How is it achieved and why do we know so little about it? While the masses are taught that events happen by accidents or are due nature's reasons, the highly privileged elites know very well that people can be scientifically controlled throuth various means, the most effective being the control of the wealth. Roberts' impeccable research fully documents how the privately owned US central bank (Federal Reserve) has completely hijacked the nation's economy and how millions of Americans are paying interest on money that gets created out of thin air thus draining them of their hard-laboured wealth. This highly acclaimed book will surely be of great interest to any reader on the planet as it explains in minute detail how the power elite actually gets its power and that the mere existence of a central bank plays a central role in it. The author offers immediate solution to the problem and a completely step-by-step legal procedure to disable the bank monster. This amazing piece of research will surely explain you what is wrong with US economy and can be applied to other economies as well. A must read for everyone.