Lenin Rediscovered: What Is to Be Done? In Context 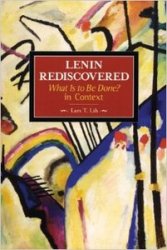 What Is to Be Done? has long been interpreted as evidence of Lenin’s “elitist” attitude toward workers. Lih uses a wide range of previously unavailable contextual sources to fundamentally overturn this reading of history’s most misunderstood revolutionary text. He argues that Lenin’s polemic must be seen within the context of a rising worker’s movement in Russia, and shows that Lenin’s perspective fit squarely within the mainstream of the socialist movement of his time.