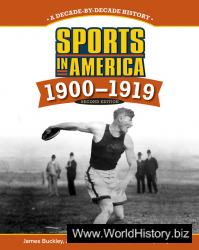 The first decade of the 20th century saw many firsts from the first World Series baseball game to the first Indianapolis 500 auto race. This second edition of 1900 1919 is fully revised, and for the first time, contains full-color photographs. Highlights include: The first Rose Bowl game in 1902 The first World Series in 1903 Jack Johnson becoming the first African-American heavyweight boxing champion in 1908 The first Indianapolis 500 auto race in 1911 Jim Thorpe’s amazing year in 1912 Tennis champ and survivor of the 1912 Titanic sinking Richard Williams coming back to win the U.S. Tennis Championship in 1914 The launch of the National Hockey League in 1918 The 1919 Black Sox scandal, in which players on the Chicago White Sox fixed the World Series.