The Russian Orthodox Church, 1917-1948 : from decline to resurrection 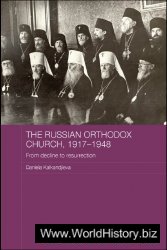 This book tells the remarkable story of the decline and revival of the Russian Orthodox Church in the first half of the twentieth century and the astonishing U-turn in the attitude of the Soviet Union’s leaders towards the church. In the years after 1917 the Bolsheviks’ anti-religious policies, the loss of the former western territories of the Russian Empire, and the Soviet Union’s isolation from the rest of the world and the consequent separation of Russian emigrés from the church were disastrous for the church, which declined very significantly in the 1920s and 1930s. However, when Poland was partitioned in 1939 between Nazi Germany and the Soviet Union, Stalin allowed the Patriarch of Moscow, Sergei, jurisdiction over orthodox congregations in the conquered territories and went on, later, to encourage the church to promote patriotic activities as part of the resistance to the Nazi invasion. He agreed a Concordat with the church in 1943, and continued to encourage the church, especially its claims to jurisdiction over émigré Russian orthodox churches, in the immediate postwar period. Based on extensive original research, the book puts forward a great deal of new information and overturns established thinking on many key points.