Freedom 7: The Historic Flight of Alan B. Shepard, Jr 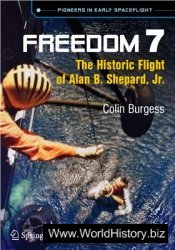 Inevitably, there are times in a nation’s history when its hopes, fears and conﬁdence in its own destiny appear to hinge on the fate of a single person. One of these pivotal moments occurred on the early morning of May 5, 1961, when a 37-year-old test pilot squeezed himself into the conﬁnes of the tiny Mercury spacecraft that he had named Freedom
7. On that historic day, U.S. Navy Commander Alan Shepard carried with him the hopes, prayers, and anxieties of a nation as his Redstone rocket blasted free of the launch pad at Cape Canaveral, hurling him upwards on a 15-minute suborbital ﬂight that also propelled the United States into the bold new frontier of human space exploration.This book tells the enthralling story of that pioeering ﬂight as recalled by many of the participants in the Freedom 7 story, including Shepard himself, with anecdotal details and tales never before revealed in print.
Although beaten into space just three weeks earlier by the Soviet cosmonaut Yuri Gagarin, Alan Shepard’s history-making mission aboard Freedom 7 nevertheless provided America’s ﬁrst tentative step into space that would one day see its Apollo astronauts – including Alan Shepard – walk on the Moon.