From Marx to Lenin: An evaluation of Marx's responsibility for Soviet authoritarianism 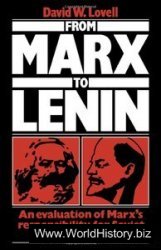 Author: David W. Lovell
From Marx to Lenin: An evaluation of Marx's responsibility for Soviet authoritarianism
Cambrigde University Press
2009
ISBN: 0521125537
Format: PDF
Size: 10,7 МБ
Language: English
Pages: 252
This study is a contribution to the debate, begun just after the October Revolution, concerning the relationship between Marx's project and Soviet society. It focuses, however, only on the political aspects of the matter: to what extent was early Soviet authoritarianism the necessary outcome of Marx's works? Since Lenin's practice and theory largely determined and justified the early political character of the Soviet state, we may ask whether Lenin was implementing Marx's project or a project of his own design. Lenin, influenced by debates within Social Democracy and by the experience of the Russian revolutionary tradition, used a one-sided interpretation of Marx's work to build and defend a 'transition' which was fundamentally authoritarian. Marx was not causally responsible for the theoretical foundation of Soviet authoritarianism.