A Brief History Of Iraq 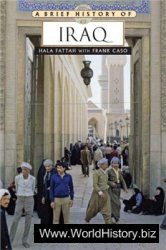 This is a comprehensive guide to more than 6,000 years of history in Iraq.Covering everything from the ancient Mesopotamian civilizations to the fall of Saddam Hussein and the current war in Iraq, this comprehensive book examines the changing landscape of this interesting country. Because of its porous frontiers, its accommodating soil and climate, its diverse inhabitants, and its many cultures, Iraq's history over the millennia has been one of interaction, adaptation, acculturation, and modification. This new volume focuses on the societies, peoples, and cultures of Iraq, as well as the regional influences that shaped the ethnicities, religions, sects, and national groups in this country.This title includes coverage on: Iraq, the first society; The Persian Empire, Alexander the Great, and the Sassanians; Iraq under the Umayyad dynasty; Iraq under the Abbasid dynasty; The Mongol invasion and early Ottoman rule; Iraq under the Ottomans; British occupation and the Iraqi monarchy; The growth of the republican regimes and the emergence of Baathist Iraq; The rule of Saddam Hussein and the difficult legacy of the mukhabarat state; and, The war in Iraq.