Churchill By Himself: The Definitive Collection of Quotations 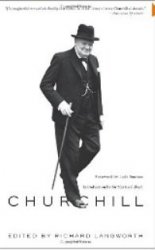 Winston Churchill (1874-1965) was one of the most inspiring leaders of the twentieth century, and one of its greatest wits. War reporter, Chancellor of the Exchequer, Prime Minister, Nobel Laureate, wordplay enthusiast, he was a powerful man of many words. Throughout his life, he moved, entertained, and sometimes enraged people with his notorious wit and razor-sharp tongue. Consequently, he is one of the most oft-quoted and misquoted leaders in recent history. Now in paperback, Churchill by Himself is the first fully annotated and attributed collection of Churchill sayings--edited by longtime Churchill scholar Richard M. Langworth and authorized by the Churchill estate--that captures Churchill's wit in its entirety.