Antisemitism: A Historical Encyclopedia of Prejudice and Persecution 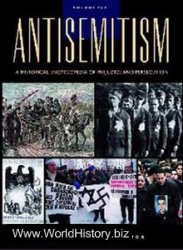 Written by top scholars in an accessible manner, this unique encyclopedia offers worldwide coverage of the origins, forms, practitioners, and effects of antisemitism, leading to the Holocaust and surviving to the present day. Antisemitism has informed the theory and practice of politics and has permeated cultures around the world. The line between anti-Jewish sentiment and other kinds of conflict is hard to define, but it is clear that the destructive nature of antisemitism has harmed the human community for two millennia.
Entries in this encyclopedia span the period from ancient Egypt to the modern era. Key theoreticians of Jew-hatred and their written works, its permeation of Christianity and modern Islam, and its political, artistic, and economic manifestations are covered. This is the first comprehensive work that deals with the entire history of ideas and practices that engendered the Holocaust.