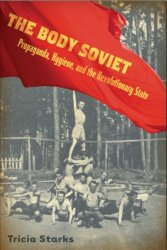 In 1918 the People’s Commissariat of Public Health began a quest to protect the health of all Soviet citizens, but health became more than a political platform or a tactical decision. The Soviets defined and categorized the world by interpreting political orthodoxy and citizenship in terms of hygiene. The assumed political, social, and cultural benefits of a regulated, healthy lifestyle informed the construction of Soviet institutions and identity. Cleanliness developed into a political statement that extended from domestic maintenance to leisure choices and revealed gender, ethnic, and class prejudices. Dirt denoted the past and poor politics; health and cleanliness signified mental acuity, political orthodoxy, and modernity. Health, though essential to the revolutionary vision and crucial to Soviet plans for utopia, has been neglected by traditional histories caught up in Cold War debates. The Body Soviet recovers this significant aspect of Soviet thought by providing a cross-disciplinary, comparative history of Soviet health programs that draws upon rich sources of health care propaganda, including posters, plays, museum displays, films, and mock trials. The analysis of propaganda makes The Body Soviet more than an institutional history; it is also an insightful critique of the ideologies of the body fabricated by health organizations.