The Murder of William of Norwich: The Origins of the Blood Libel in Medieval Europe 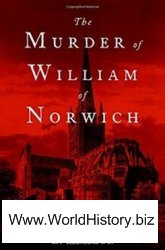 Author:Author:
The Murder of William of Norwich: The Origins of the Blood Libel in Medieval Europe
2015
Oxford University Press
Format:PDF
Size:7,5 MB
Pages: 416
Language:English
In 1144, the mutilated body of William of Norwich, a young apprentice leatherworker, was found abandoned outside the city's walls. The boy bore disturbing signs of torture, and a story spread that it was a ritual murder, performed by Jews in imitation of the Crucifixion as a mockery of Christianity. The outline of William's tale eventually gained currency far beyond Norwich, and the idea that Jews engaged in ritual murder became firmly rooted in the European imagination.