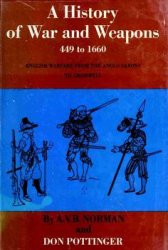 The subject was divided into nine chronological periods, beginning with the Anglo-Saxons, followed by the Normans, and then by single chapters on each of the four centuries, 12th to 15th, with the last three chapters on three half-centuries from 1500 to 1660. Within each of these nine chapters, the material is sub-divided into four parts concerned with military organization; arms and armour; tactics and strategy; and, finally, castles and cannon. Each paragraph or page is marked by an appropriate symbol to indicate which of: these four topics is being discussed at that point, so that the reader, if he wishes, could read a brief history of tactics from 449 to 1660 by reading only the passages in the nine chapters marked by the symbol "T". To assist this there are, in addition to the ordinary table of contents, four other tables of contents giving the pages for each of the four topics. The plan may sound rather artificial, but it is surprisingly successful, aided, as it is, by the numerous small but clear illustrations in two colors. Some of the weapons included are: sword, longbow, halberd, pike, battering ram, catapult, cannon, and the brass feathered gun arrow. The book also includes important battles, tournaments, jousts, Renaissance pageantry, the carousel (the mounted ballet), and the evolution of armor - each vividly portrayed in words and pictures.