Warrior Cults. A history of Magical Mystical and Murderous Organizations 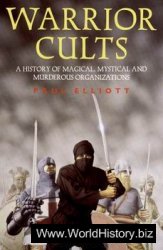 Today's terrorists are not new. Terror, murder, and stealth have always flourished in close-knit, blindly obedient cults. In fact, the very word "assassin" has its origins in a medieval warrior cult of the Middle East, while the original Thugs were a secret band who terrorized India in the 19th century. Here is the whole gruesome history of groups that have used loyalty to commit murder and spread terror. Start with the mystery cults of ancient Greece and the secret Roman religion of Mithras with its bloody initiations. Follow the sinister Knights Templar, the Japanese Ninja and Triad clans, and the Chinese Boxer cult that led the famous uprising against the British. Each of these warrior cults had its own strict codes and rituals, yet its motivations may seem strange to modern minds. Today it's more urgent than ever to try to understand, as we attempt to protect ourselves against today's versions, made far more dangerous with the possession of biological, and even nuclear, weapons.