The Viking Wars of Alfred the Great 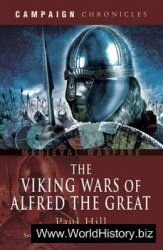 In the spring of 878 at the Battle of Edington the tide of English history turned. Alfred's decisive defeat of Guthrum the Dane freed much of the south and west of England from Danish control and brought to a halt Guthrum's assault on Alfred's Wessex. The battle was the culmination of a long period of preparation by Alfred in the wilderness - a victory snatched from the jaws of catastrophic defeat. As such, this momentous turning point around which an entire nation's future pivoted, has given rise to legends and misconceptions that persist to the present day.