The Myth of Muslim Barbarism and Its Aims 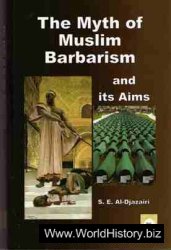 The cultural, scientific and economic acheivements of Islamic civilisation over the last 1400 years could be a great inspiration to humanity today. Unfortunately, for centuries, the impact of Islamic civilisation has been obscured and its appeal has been countered by the creation and repetition of the myth of the Barbaric Muslim.
From the Pope's imaginative justifications for the first crusade in 1095 down to the untouchable death squad roaming US occupied Iraq in 2007, the myth has been told and retold and it has convinced many of the great threat of Muslim fundamentalism, terrorism, extremism, fanaticism, irrationality, etc.
As the threat gets magnified, ever more violent measures become justified as necessary to eliminate it - up to and including genocide itself. Wars and sanctions that have killed millions of Muslims have been justified with many pretexts that turned out to be untrue, but the main false pretext is the myth of Muslim barbarism. In this Book, S E Al-Djazairi complements his substantial works on Islamic Civilisation by detailing the nature of this myth, how it was built through the ages and what forms it takes today.
He demonstrates the fallacies at the heart of each of its aspects including the charges of intolerance, oppression of women, slave trading, cruelty to captives, Muslim inferiority etc. after refuting these claims he shows the real aims of those who propagate and benefit from them.