The Second Scottish Wars of Independence 1332-1363 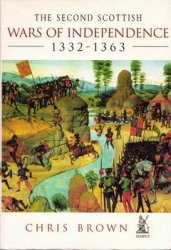 The least well known of Britain's medieval wars, the Second Scottish War of Independence lasted for more than thirty years. The Scots were utterly defeated in three major battles. The nobility was destroyed at Dupplin Muir, the rank and file died in droves at Halidon Hill and at Neville's Cross, the Scottish King was captured. So how did England lose the war? The wars of William Wallace and Robert the Bruce cast a long shadow in Scottish history. The collapse and recovery of the Bruce cause in the reign of his son, David II, has not attracted much attention among historians of medieval warfare. Drawn from English and Scottish state papers and chronicle accounts, this new book is an analysis of the armies and campaigns that would develop the tactics that gave English forces the dramatic triumphs of the Hundred Years War.